What can agricultural policy learn from a more gender-equal world? 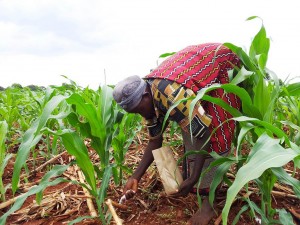 Any successful agricultural policy must address gender imbalance, and for countries like Kenya that cannot easily find more land for agriculture this is an alternative way to increase production. The January 2014 CIMMYT Socioeconomics Program Policy Brief – “Food security as a gender issue: Why are female-headed households worse off compared to similar male-headed counterparts?” – discusses these and other recommendations for agricultural policy in Kenya and elsewhere in Africa.

It is known that women in agriculture suffer from less access to land and education (and fewer resources in general), in addition to having to shoulder the burdens of housework and childcare. But other factors beyond inequality are harder to see. Where men have traditionally enjoyed greater land rights for example, persisting social norms can prevent women from claiming the benefits of legal reforms. Agricultural extension agents in Kenya are also predominantly men and have been known to marginalize women farmers.

Researchers collected detailed information about the situations of 605 female- and male-headed farming households growing maize in 88 villages of five districts across Kenya. This data was put into a model so that they could learn about the food security of FHHs having the same observed characteristics as male-headed households (MHHs) in terms of land quantity and quality, livestock, assets, education, age and family size.

Looking at the role of these factors in food security can not only show where agricultural interventions can benefit women in agriculture, but also indicate what is missing from the picture.

The study found that if FHHs had the same characteristics observed by researchers in MHHs, the gap in food security would be immediately halved. This suggests that policies to improve land quality or access to resources for women will reduce gender inequality in Kenyan agriculture. However, the remaining gender gap in the more equal world depicted by the model warns that hidden factors such as cultural practices also hold women back, demonstrating how important it is for policymakers to work with cutting-edge social sciences research to unearth complex gender issues.

Women also possess a great capacity to address the difficult challenges they face; self-help groups have proven to be crucial in helping women access markets and credit. Transformative policies will encourage and strengthen these social networks.