MLN Diagnostics and Management in Africa through Multi-Institutional Synergies 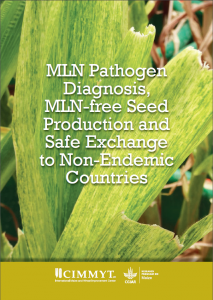 Maize Lethal Necrosis (MLN) disease has continued to wreak havoc on maize production in East Africa since it was first reported in Kenya in 2011, and since then reported in the Democratic Republic of the Congo, Ethiopia, Rwanda, Tanzania, South Sudan and Uganda. The disease, caused by a combination of the Maize Chlorotic Mottle Virus (MCMV) and Sugarcane Mosaic Virus (SCMV), causes irreversible damage that kills maize plants before they can grow and yield grain. MLN pathogens can be transmitted not only by insect vectors but also through contaminated seed.  The epidemic is exacerbated by lack of MLN-resistant maize varieties and year round cultivation of maize in many areas in eastern Africa, enabling the build-up of virus inoculum and allowing transmission via insect vectors. For this reason, CIMMYT scientists Monica Mezzalama, Biswanath Das, and B.M. Prasanna have developed a brochure “MLN Pathogen Diagnosis, MLN-free Seed Production and Safe Exchange to Non-Endemic Countries”  for providing important information on these key areas to stakeholders, especially seed companies and regulatory agencies operating in both MLN-affected as well as MLN non-endemic countries.

“MLN is an increasing regional threat to food security in sub-Saharan Africa, and must be tackled with concerted effort from all actors in order to safeguard the maize seed sector and protect the livelihoods of smallholder farmers,” said Prasanna. The brochure proposes several key steps to curb the spread of MLN, through MLN diagnostics, production of MLN-free seed,  and safe exchange to MLN-endemic countries. The brochure also advises on appropriate agronomic practices that can prevent disease incidence in seed production fields.

An International Conference on “MLN Diagnostics and Management in Africa” will be organized jointly by AGRA (Alliance for Green Revolution in Africa) and CIMMYT during 12-14 May in Nairobi, Kenya, in order to review the present status of MLN incidence and impacts in sub-Saharan Africa (SSA), controlling seed transmission of MLN, managing seed production in MLN-endemic countries, creating awareness about MLN diagnostic protocols, and identifying ways to strengthen MLN diagnostics capacity in SSA, among other topics.