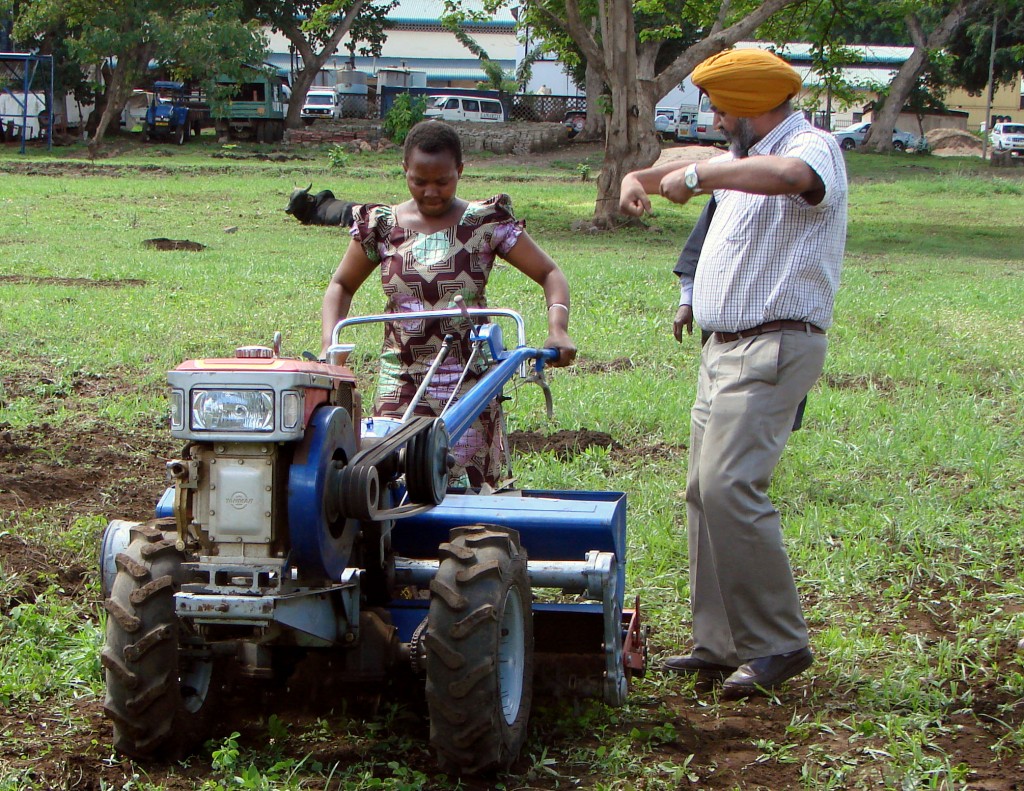 The goals of the Farm Power and Conservation Agriculture for Sustainable Intensification (FACASI) project are to address the issue of declining farm power in eastern and southern Africa, and reduce the labor burden that comes with low farm mechanization, by promoting small-scale mechanization based on two-wheel tractors. Farm power is particularly scarce for female-headed households (FHHs), who have limited access to human labor and often don’t own (or are culturally forbidden to operate) draft animals. FHHs are often the last households to access land preparation services, which leads to lower yields. Even in households headed by men, women supply most of the farm labor and perform highly labor-intensive tasks, such as weeding, threshing, shelling or transport of inputs and agricultural commodities to and from the market by head-loading.

Although mechanization has the potential to close the gender gap in agriculture, past efforts based on large four-wheel tractors have generally led to inequitable access to mechanization, favoring wealthier farmers, and have often widened the gender gap. Similarly, although most of the labor burden in agriculture is placed on women, it is often men’s tasks that are mechanized in priority. Will small-scale mechanization follow the same pattern? Or will the use of less expensive two-wheel tractors promote equitable access to mechanization and contribute to closing the gender gap? In addition, will the versatility of these small machines accelerate the mechanization of tasks done by women? Or is women’s current labor burden unlikely to translate into demand for mechanization, regardless of its form, because of socio-cultural norms affecting gender dynamics? Finally, if women’s tasks are mechanized, will this create opportunities for them, or alienate them in their household chores?

To answer parts of these questions, a CRP MAIZE competitive grant was awarded to the Royal Tropical Institute (KIT) at the beginning of 2014 to conduct a gender analysis of small-scale mechanization in the FACASI sites of Ethiopia (Hawassa and Assela) and Kenya (Bungoma and Laikipia). The research team included Anouka Van Eerdewijk, KIT gender advisor, Katrine Danielsen, KIT senior advisor, gender and rights Elizabeth Mukewa, consultant in charge of the field work in Kenya and Mahlet Mariam, consultant in charge of the field work in Ethiopia. The team presented its finding to the FACASI project in Addis Ababa on the 10 October.

A second conclusion is that there are large variations in contexts, household types, and even between women in similar household types. For example, pooled labor is used to reduce the labor burden in some locations (e.g. Assela), but not in others (e.g. Laikipia). In addition, women in male-headed households often don’t have control over resources for reducing their labor burden, whereas women in FHHs might have control, but are resource-constrained. In male-headed households where women do control part of the resources, women can choose options to reduce their labor burden and adopt mechanization. This is particularly true of women who individually own land and/or have a formal employment outside agriculture. These variations suggest that demand for, and the benefits of mechanization cannot be assumed, but need to be considered and monitored in context.

The findings of this study will be used to develop a set of gender-sensitive indicators to monitor and evaluate FACASI. They will also guide a number of research activities in the project, including the testing of mechanization business models with women entrepreneurs, in which the adoption and benefits of mechanization can be further scrutinized for different household types and members.